The tidal sections of the South Island lowland rivers on both the East Coast and West Coasts are well known for their sea run/estuarine trout fishing. Its a highlight on our fishing calender, and each spring my son Louie and I plan a couple of trips to specifically target these fish.

Sea run trout are very mobile and move between the salt and freshwater in search of food, especially during the months of Sept-Dec when white bait enter our river systems in large numbers. They also feed on smelt, yellow eyed mullet, native bullies, lampreys, juvenile flounder, crabs and other small crustaceans such as prawns.

We planned to fish in a new river this trip, one I hadn’t fished in since I was a small child with my father. We arrived at the river 3 hrs before low tide and Louie was into a fish in the first 20 mins …. a nice fish of around 4.5 lbs. We concentrated on the drop off of the main current, where the water depth changed and the faster water met the slower, trout will often cruise this section of river looking for bait, bullies, mullets etc, using the deeper water to their advantage to ambush unsuspecting prey. We landed several fish over the next couple of hours as we carefully stalked the shallows looking for the ‘tell- tale’ signs of fish on the hunt for food. I fished a 6wt rod with a clear/camo intermediate fly line and 10lb Maxima tippet with a lightly weighted smelt pattern tied on, the water was between knee and waist deep so the sink rate was perfect.

Things went quite for an or so until the surge of the tide began to push back up stream. This got fish on the move again and on the feed I switched my set up for an Airflo Di3 fly line and tied on a UV Simi Seal leech with weighted dumb bell eyes to help get it down in the current and connected with a solid fish with in minutes who unfortunately broke me off in the strong current. I proceeded to slowly fish my way back upstream with the incoming tide, landing 2 fat wee bars of silver both about 3-4 lbs …..as well as experiencing a couple of “long distance releases” !

The UV Simi-Seal leech with nickel dumbbell eyes tied Clouser style is a favourite pattern I tie for searching the deeper runs, faster water and drop offs. A robust tie, and one with lots of movement and the just right amount of “bling”. 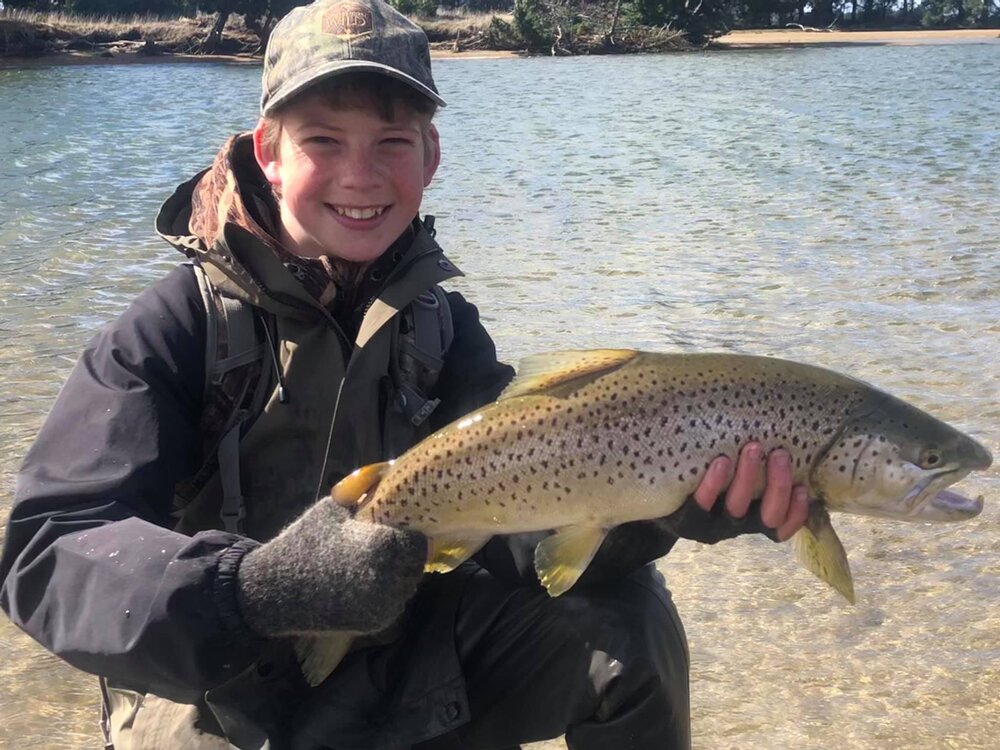 Louie with the fish of the trip. A beautiful 7lb fish in superb condition.

It can be exhilarating fly fishing when you can see trout swirling and slashing around working the surface, seeing a large bow-wave coming towards you really gets the heart racing ! The takes are generally savage and the ensuing fight hard and long !

Sadly the water quality in many of our estuaries and sections of lowland rivers are in a steady decline. Nitrate-nitrogen concentrations are worsening and E.Coli concentrations are affecting our ability to swim in many rivers and streams. The discharge of sewerage into them from many of our our urban rivers, and over fertilization of them with farm run off and animal effluent in our most heavily farmed rural regions are major contributors. Remember that estuaries are at the bottom of the freshwater drainage network, which means that “what is polluting our estuaries” often comes from the land, carried down through our streams and rivers through rainfall.